United through National Service is bringing unexpected voices together in the lead up to the 20th Anniversary of September 11th to show the full spectrum of support for national service and its potential to unite the country, bridge divides, and restore the soul of the nation. 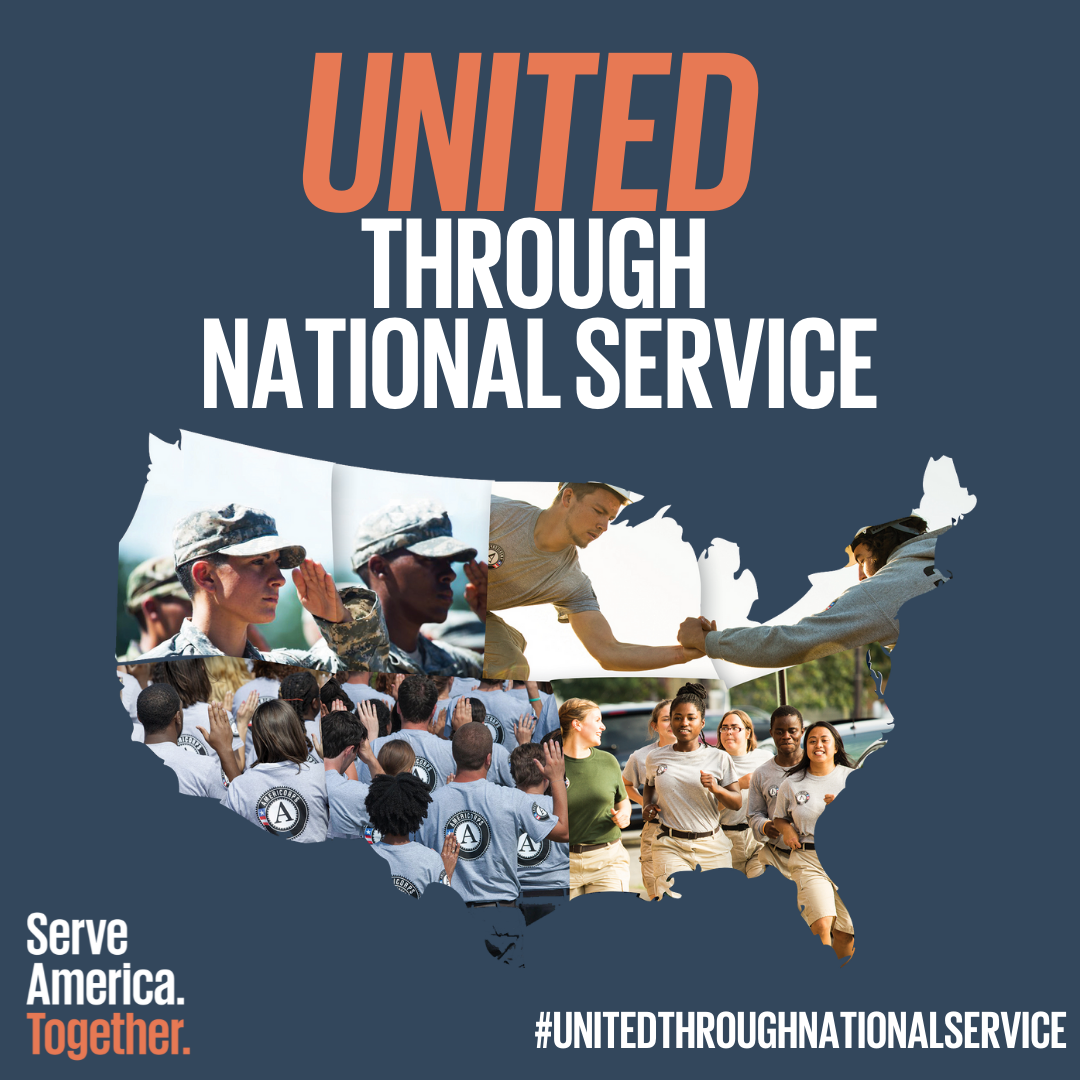 There is currently tremendous opportunity for a significant investment in national service. In the past year, we’ve seen increased interest in national service from people across the political and ideological spectrum. From the Sunrise Movement’s push to build a new Civilian Climate Corps through AmeriCorps to a recent piece calling for mandatory national service to build unity from Neil Patel, the co-founder of conservative news site The Daily Caller — people who agree on close to nothing, are coming together around the idea of national service.

About "United through National Service"

To harness this energy from these high profile leaders and to try to break through with the Biden Administration, Serve America Together co-chairs Stan McChrystal and Laura Lauder launched United through National Service in June at Aspen Ideas Festival and followed up with an op-ed in the Chronicle of Philanthropy.

This summer and fall, Serve America Together will tell the stories of young Americans who are bridging divides in their communities through national service while also highlighting the voices of leaders from across the political spectrum as they call for an expansion of national service to help bring the country together. United through National Service will culminate the week leading up to the 20th anniversary of September 11th with a week-long media blitz that aims to feature a mix of national TV hits, videos, social media, op-eds, and local news segments — all with a focus on uniting Americans around and through national service

How to get involved?

A Time for National Service

Hearing the stories of communities coming together over the past 18 months has given me a sense of hope, more specifically, a sense of hope about what our country can accomplish when we work toward a shared goal.

During this difficult time, I have had the privilege of working closely with HealthCorps, the 20-year-old not-for-profit organization my wife and I founded to improve teenager health in underserved communities across the country. Through innovative wellness lessons, peer mentoring, and service learning, HealthCorps has empowered the next generation to be change agents for health in their community. Throughout the pandemic, HealthCorps served over 68,000 meals to those in need, supplying meals to students who were out of school, in addition to providing wellness resources to support virtual learning.

Chronicle of Philanthropy: National Service Is One of the Few Things That Could Unite America

By Laura Lauder and Stanley McChrystal

To take advantage of this moment and help ensure that national service rises to the top of the Biden administration agenda, we have kicked off a new campaign — United Through National Service.

This drive will include national media engagements and social media spotlighting diverse high-profile voices from across the country and the political spectrum in calling for an expansion of national service to heal a divided nation. The campaign will culminate during the week leading up to the 20th anniversary of the September 11, 2001, terrorist attacks as a reminder that we are strongest when we all stand together...

...In that spirit, we urge President Biden to join us by calling a generation of young people into service to help bridge the divides that threaten to continue to tear our country apart. We hope Congress has the courage to make a bold investment in national service, and we encourage fellow philanthropists and leaders of all types to join us in this work, lending their resources and their voices to this important effort. National service deserves more than a civic moment.

Enlist young Americans in the fight to stop climate change

By Varshini Prakash and Kristen Bennett

There is an entire generation that will do whatever it takes to stop the climate crisis and improve our communities. We understand that the task that lies before us is historic: There are millions of buildings that need to be retrofitted, homes to be rewired, miles of shoreline to be prepared for rising waters, and forests and parks to be conserved.

We are ready to take on the responsibility. It’s time for the federal government to put us to work solving the climate crisis and rebuilding our economy.

President Biden has an opportunity to harness the energy of our generation and meet his administration’s priorities by putting a generation of young people on pathways to well-paying union jobs. He has the opportunity to take action at the scale of the crisis and young people are ready to get to work serving their communities.

Toxic polarization threatens our democracy. Here's how national service can save us.

By Jenise Terrell and Kristen Bennett

Trust is the backbone of American democracy. But trust in the media, the federal government and our neighbors is hard to come by, and our democracy continues to face growing threats from misinformation and polarization.

By Laura Lauder and Stan McChrystal

The United States, long grounded in the idea of individual liberty, also boasts a deep, cross-partisan history of national service. Building on a belief he first shared at the 2012 Aspen Ideas Festival, retired General Stanley McChrystal recently called on the president to invest in national service for one million young Americans annually “to ensure the strength and security of our nation.” At a time of mounting political division and innumerable shared challenges, this conversation explores what it would take to implement a national service program of this scale, and what it could mean for the future of American society.

Media inquiries, as well as those interested in adding your voice or support to this effort, should contact Aly Ferguson at [email protected]